Kingdoms of Camelot Wiki
Register
Don't have an account?
Sign In
Advertisement
in: Battle, Resources, Research,
and 2 more 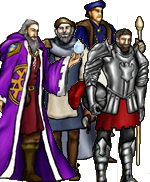 Knights can be assigned to specific roles in which they are able to boost specific functions of your city. They are also needed to lead your troops into battle.

Note: Max Skill Points attributed to each of 4 catagories is 300.

Max Loyalty = 100% Both may be temporarily incresed with items.

knights. Each role can be filled by only one knight but can be re-assigned at any given time without any costs. Once you have appointed a knight you will see the following window under the "My Knights" tab. Your knights will gain a set amount of experience on an hourly basis depending on the level of your Knights Hall.

While you can appoint any friend as a knight, those who also play KoC will start with higher points (55 of each type) than those who do not play (50 points of each type). For more information, see Adding Game Friends.

Of course, not all roles for knights are useful all the time. For your consideration:

The amount of XP needed to reach the next level:

We all know that we can use knights to boost resource production,

build times, research times and training times. Knights are also used for attacking. when you first start out you should only have 1 or 2 knights but as you get stronger and get in to bigger alliances you may need to have 9 or 10 knights for finding crests and attacking other players. If you have 9 idle knights you can attack 9 times at a time,but you also have to have a level 9 Rally Point.

Your alchemy knight is sitting on his hands not doing a thing since you researched everything to level 9. Don't you wish you had that level 10 Eagle Eyes, but you refuse to pay for gems for divine inspiration? Merlin is one of the stingiest people to ever grace this game, and his boxes give you nothing but stone and gnomes. The bonus of level 10 eagle eyes is that you get a line that shows you when the person being scouted last logged in. Perfect for finding a nice farm, or find if your potential farm is a lemon. So, once again, assign an idle knight to the alchemy position. Now, you have a highly intelligent knight loose. Use him instead of a regular knight when you send out your scout, and he will bring back the last log in time of your target.

No more need for that Divine Inspiration for that level 10.

Note: This only seems to work if your knight's intelligence is 75 or above

Knights are not free of charge. The higher level your knight, the higher their salary. Having multiple high level Knights can be costly, which is why you shouldn't assign all your friends as knights. It is wise to assign all four roles and have a couple extra knights for your troops, anything over that is a waste of gold if you don't have multiple armies which you can't utilize because you lack knights. (from AlenkaBana) - I disagree with the above assertion. If you plan to play this game you need to build knights. Get as many knights as you can with the gold you have. As you get more gold get more knights. Gold is a waste. Period. So don't worry about using it all. (you can always click Increase Gold every 20 minutes to get more). Start building knights right away. Always have extra knights so that when you start a new city you have a full compliment of knights for that city, (the bonus being that you won't have knights starting from scratch xp in your new city). If you are worried about the salary don't assign skill points until you are ready to use that knight. Salary will not increase until skill points are assigned. Keep a knight in all four roles, even if you aren't using that knight for that role. Knights assigned to roles earn xp 25% faster than idle knights. I've also seen knights with 100% loyalty earn xp faster than knights with 70% although I don't know the ratio.(end from AlenkaBana)

A knight's base salary is 20 gold. Every 1 point increase in any skill over the starting skill level increases the salary by 20 gold. So, if a knight starts with a basic skill level of 55 in all attributes and you have built his/her combat skill to 77 and his/her political skill to 63, that is an increase of 30 skill points x 20 gold per skill point + the base salary of 20 gold for a salary of 620 gold.

Knights are needed to lead your troops into the battle. They also boost your troops by the amount of combat skill they have. Only knights without roles can lead attacks (idle knights).

Loyalty does not have any function in the game. It is an intended feature that has not been implemented yet. You can safely ignore it for now.

When it is implemented, loyalty is expected to be a measure of how long your knights will stay with you if you run out of gold and cannot pay their salaries.

It is important to understand that each of these roles increase the speed of construction, training, research or production. They do not decrease the time required by the same percentage. Consider that it might take 300s to build a building with no speed bonus. That is:

A speed increase of 40% would give:

The Politics score of your Foreman increases the construction speed of your buildings and wall defenses by 1% for every 2 points of Politics.

The Combat score of your Marshal increases the training speed of your troops by 1% for every 2 points of Combat.

The Intelligence score of your Alchemystic increases the speed of your research by 1% for every 2 points of Intelligence.