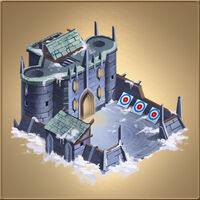 The Barracks are where Troops are trained. The more powerful troops require higher levels of barracks.

When you click on any of your barracks, you will open the barracks window which allows you to train troops and review troops in training.

This is where you can train new troops, or remove troops from your army by dismissing them. Each type of Troops is listed here, along with the current number of that troop type found in your army.

Click on train under a troop type to open the training window for those troops. The training window lists the basic stats of the troops, the construction requirements, and a dialog to let you train additional troops of this type. The number listed under "Maximum" is the number of troops you can train with the resources and technology that you currently have. If this number is zero, then you are missing some item or items to be able to train that type of troop. It could be a lack of Resources, or a lack of Building level, or a lack of Research level, or simply a lack of idle population. The resource table in the middle of the window will highlight the missing items.

To train troops, enter the number that you want to train in the box and click start training. This is also the time to use a Lancelot's Tutelage item, if you have one, to increase the training speed of this batch of troops (i suggest using the lancelot's tutelage with a larch batch of troops there is no need to use it if you are only training a small amount of troops unless you really need them) . The resources and population required for training the batch will be removed from your inventory as soon as you make the training request.

Each city can only train one batch of troops at a time. Troops can be queued up for training. You may line up one batch of troops in the queue for each barracks found in your city. (3 Barracks allows 1 batch training, plus 2 batches in queue waiting to be trained.)

This is where you view the troops that are currently being trained, and the troops waiting in queue to be trained. Each batch of troops will include the time that will be required to complete the training.

You can cancel the batch of troops that are currently in training, or in the training queue. A dialog window will open to tell you how many resources you will receive if you cancel, and it will ask you to confirm that you want to cancel these troops. When you cancel troops in training (or in the queue), you will receive a refund of half the Resources and idle population that was consumed when the troops were requested.

The time it will take to train troops is determined at the time that you put their training in the queue, not by the status of your city/knights when the troops waiting in the queue actually begin their training. This means that if you start training 1000 archers, followed by 1000 swordsmen put into the training queue to wait their turn, regardless of how many barracks you build in the mean time, the swordsmen will be trained at the rate estimated when you put them in the queue. It's worth considering this in the early stages of your city when your troop production is slow but building barracks is quick.

Troop training speed increases by 10% for each level of the Barracks. If a level 1 Barracks has a base speed of 1, then:

Troop training speed for multiple barracks within a city is the sum of the individual speeds:

Time to train troops is the base time divided by the total barracks speed:

For troops that require level 2 or greater barracks, the total training speed includes all barracks in the city, not just the ones that meet the level requirement.

Observations of these formulae in practice on a new account:

heres a little glitch i found: a lvl. 0 barrack

EDIT: This can easily be fixed by refreshing.

Retrieved from "https://koc.fandom.com/wiki/Barracks?oldid=31157"
Community content is available under CC-BY-SA unless otherwise noted.