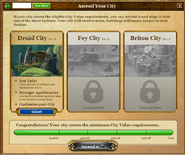 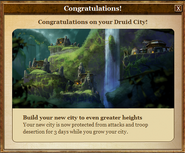 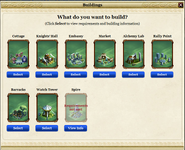 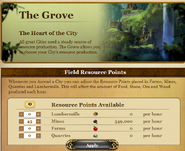 This is a single point control for all production units. It is a replacement for the resource fields. As of current once the numbers are set they cannot be changed until a city is ascended to the next level. Start with 45 plots to distribute for ore/food/wood/stone.

When you first choose to ascend the city you do it for 0 gems. You can't be training/reviving troops, raiding/reinforcing/being reinforced/encamped, Researching/ongoing market trades, and you must delete all raids from your rally point to ascend.

Begin to build infrastructure, Immediately after you ascend to level 1. if you click on ascend again, you will be told your city can ascend again for 2,000 gems. Don't worry about it. Don't do it. When you have rebuilt the infrastructure to about average of level 8 buildings, that will have reduced to zero gems.

I would suggest if you want to build bloodthorn troops as you build your level 1 ascended city, you do SMALL groups. They take a huge amount of time and resources to make, and if you finish infrastructure and want to go to ascension level 2, you'll have to cancel the build queue or wait a week to go up. Neither are good options.

Retrieved from "https://koc.fandom.com/wiki/Ascension?oldid=30216"
Community content is available under CC-BY-SA unless otherwise noted.